Electric Cars are about to take us into the future, join me and learn how close we are to swapping our internal combustion engines for electric ones.

Into The Future with Electric Cars

The internal combustion engine as we know it has been obsolete for decades, but because of the powerful and influential oil corporations,

They make billions of dollars off our natural gas and oil resources each year, alternative fuel power sources have been downplayed.

These facts cannot be hidden any longer with the advancement of the internet which 3.7 Billion people have access to daily.

There are many alternate power sources to drive our modern vehicles at present, I will be looking at one……………….. ELECTRICITY !!!

The 2020s could be the Decade when Electric Cars take over.

In the late 19th century and early 20th-century electricity was one of the preferred methods of automobile propulsion due to its ease of use and comfort.

With advances in the technology of the internal combustion engine, due to its almost instant ability to travel greater distances by refuelling with liquid gasoline, it was more convenient than waiting to recharge an electric vehicle.

They had replaced the hand crank on NC R’s cash registers with an electric motor five years earlier. With the invention of electric starter motors to start up our hand crank automobiles of that era.

Electric Vehicle – is a term given to any vehicle that uses electricity as its only propulsion source.

Are generally referred to as a highway-capable (over 100Kms per hour) Automobile powered by Electricity.

Are classified in the US as neighbourhood electric vehicles (nev), and as electric motorized quadricycles in Europe, they are plug-in electric powered microcars with limitations by their weight and power. They are limited to the maximum speed that they can travel,  Golf Carts are a prime example.

While an electric car’s power source is not explicitly an onboard battery, electric cars with motors powered by other energy sources are generally referred to by different names:

How An Electric Car Works 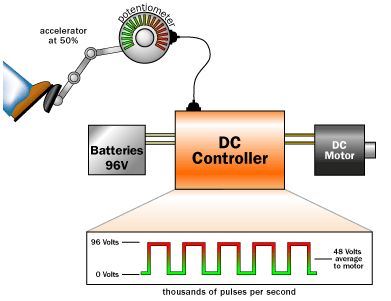 There are fewer moving parts in an Electric Car making it more reliable, fewer breakdowns

Do You want to know more?

Battery technology for the modern electric car is still in the developing stage and is far from perfect. Those working on improving car battery technology are trying to find ways to prolong battery life, so increasing travelling range of the modern Electric Car.

The record stands at a claimed 350 Kms on a single charge as claimed by Chevrolet with their 2016 Chevy Bolt.

If it wasn’t so important for the future of electric cars, it could almost get tiresome.

Just how do you improve batteries for longer life, quicker charging and a greater range?

It’s a question being investigated by great minds all around the world and has turned up some surprising and exciting results over the last few years.

We’ve all heard–and laughed off–stories of water-powered cars. It just isn’t possible on any practical, car-based level. But aluminum-air uses water in a different way.

Aluminium is used as the anode in a battery, ambient air (and the oxygen in it) as a cathode, and water molecules. Combined in the battery, they produce hydrated aluminium oxide and energy–and that energy can be used to power a car.

The aluminium plates used have a high energy density, and companies testing it such as Phinergy say you’d need to refill the car with water every few hundred miles. The air–well, that’s all around us.

But it isn’t perfect, and several research groups are looking for a way to improve on its existing strengths.

The rate at which they expire depends on the type of battery and how they are used — many types of batteries are damaged by depleting them beyond a certain level. Lithium-ion batteries degrade faster when stored at higher temperatures, when they are rapidly charged, and when they are fully charged.

In March 2016 the Toyohashi University of Technology and Taisei Corp of Japan unveiled the first electrical car in the world that would be able to run without a battery.

It seems that with ongoing technological breakthroughs concerning electric car tech. we will be seeing some interesting developments in this sector.

The popularity of Electric Cars

Most popular car manufacturers have a model or 2 of an electric car in or ready for production. Tesla is believed to be the leaders here.

Below is a stat chart of sales in Electric Cars from 2008 to 2016, with Nissan Leaf leading the way in sales and popularity, this indicates the popularization of electric cars which is increasing exponentially each year.

In the very near future, Electric Cars will become as normal as Internal Combustion Engined Cars are today.

What are YOUR  thoughts on Electric Cars?  Leave a comment below

The Era of the Electric Scooter is Here.