Everything has a beginning, so when you use your Car, you get in and start up and the engine comes to life. Have you ever given a thought as to how this happens? At the core of this event is Car Batteries, I will explain how it works.

Having an understanding of Car Batteries is importance is key to “Happy Motoring”. Today’s modern vehicles use mostly lead acid batteries.

The History of Car Batteries

Early Car’s electrical systems were limited and did not have batteries, they were

Significant events pertaining to batteries and charging systems were:-

The availability of higher-efficiency motors, new wiring techniques, and digital controls, and a focus on hybrid vehicle systems that use high-voltage starter/generators has largely eliminated the push for switching the main automotive voltages.

Today’s modern vehicles have a negative ground system. The negative battery terminal is connected to the vehicle’s chassis or body.

The changeover from 6 to 12volts happened when bigger engines with higher compression ratios, like our modern cars today, required more electrical power to start

This causes a chemical reaction that releases electrons, allowing them to flow through conductors to produce electricity.

Batteries are made up of six galvanic cells in a series circuit. Each cell provides 2.1 volts for a total of 12.6 volts at full charge. A car battery is made of a thick plastic case, lead-based positive and negative internal plates, plate separators, lead terminals and electrolytes

As the battery discharges, the acid of the electrolyte reacts with the materials of the plates, changing lead dioxide to lead sulfate.

When the battery is recharged, the chemical reaction is reversed: the lead sulfate reforms into lead dioxide. With the plates restored to their original condition, the process may be repeated.

How it is used in our Cars

The Battery in our Car is the source of supplying Electrical Energy to our vehicles and its main purpose is to start the engine.

Once the vehicle is started, the alternator supplies our vehicles with electricity,

Starting discharges only 3-5 % of the battery’s capacity.

Batteries are designed to release a high burst of current and then be re-charged quickly. They are not designed for deep discharge, and fully discharging the battery will reduce the battery’s longevity. Modern Batteries are a lead-acid type and provide 12.6 volts of direct current, nominally 12 volts; the battery is actually six cells connected in series.

The Battery also supplies the power needed when the electrical requirements of the vehicle exceed the supply from the charging system (Alternator and Regulator). It stabilizers and evens out potentially damaging spikes in voltage while the engine is running, 90% of power is provided by the Alternator, which includes a Voltage Regulator to keep the output between 13 and 14.5 Volts.

A car’s battery is constantly charged by the alternator which is driven by a fan belt connection to the engine as long as the engine is running. 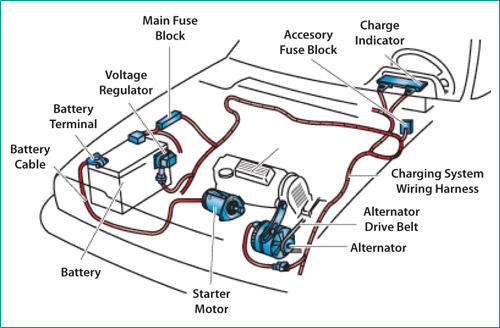 In the past, batteries required maintenance in the form of electrolyte refills. Batteries today retain their fluid for the life of the battery. A great disadvantage of these batteries is that they are very intolerant of a deep discharge.

When a maintenance free car battery is completely drained by leaving the lights on, the lead plated electrodes are coated with sulfate deposits and can reduce the battery’s lifespan by more than a 1/3.

Some vehicles use other starter batteries. the 2010 Porsche 911 GT3 RS has a lithium-ion battery as an option to save weight. Heavy vehicles may have two batteries in series for a 24 volts system or may have series-parallel groups of batteries supplying 24 volts. 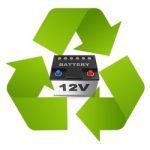 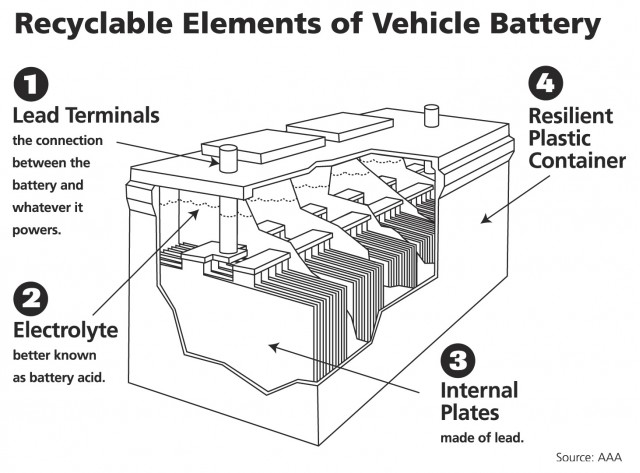 Lead–acid battery recycling is one of the most successful recycling programs in the world. In the United States, 99% of all battery lead was recycled between 2009 and 2016.

An effective pollution control system is a necessity to prevent lead emission. Continuous improvement in battery recycling plants and furnace designs is required to keep pace with emission standards for lead smelters. Recycling of automotive batteries reduces the need for resources required for manufacture of new batteries,

Approximately 50% of premature car battery failures are caused by the loss of water for normal recharging, due to the lack of maintenance, evaporation from high underhood heat, or overcharging…

Specially designed deep-cycle cells are much less susceptible to degradation due to cycling and are required for applications where the batteries are regularly discharged, such as electric vehicles (forklift, golf cart, electric cars and other) and uninterruptible power supplies.

These batteries have thicker plates that can deliver less peak current but can withstand frequent discharging. Some batteries are designed as a compromise between starter (high-current) and deep cycle batteries.

They are able to be discharged to a greater degree than automotive batteries but less so than deep cycle batteries. They may be referred to as “marine/motorhome” batteries, or “leisure batteries”.

Car battery after an explosion. Excessive charging causes electrolysis, emitting hydrogen and oxygen. This process is known as “gassing”. Wet cells have open vents to release any gas produced, and VRLA batteries rely on valves fitted to each cell.

Accumulated hydrogen and oxygen sometimes ignite in an internal explosion. The force of the explosion can cause the battery’s casing to burst, or cause its top to fly off, spraying acid and casing fragments.

How to jump start a vehicle with a flat battery

A flat car battery  can be jump started by a charged car battery, with booster cables, by:-

Allow the Live Battery vehicle to idle at a higher speed than normal for about a minute, then start the Dead Battery vehicle, when running, carefully disconnect the booster cables.

(never connect Black to Red) or ever allow Black and Red jumper cable clamps to touch each other while connected to a Live Battery, it will arc (spark) violently.

A word of caution – The acid in lead-acid batteries is highly corrosive, so caution should be practiced when handling and working with an Automotive battery.

Signs that you may need a new Car Battery

When replacing your car’s battery a few factors has to be taken into consideration.

Below is a rough guide, What you are primarily using your car for?

Your car manufacturer’s handbook is a good source of information pertaining to your car’s battery specification, failing that, consult your Auto Mechanic or Battery Centers, which are more than equipped to guide you in choosing a replacement unit.

I am confident that the information contained herein served to grant you a little more insight into your car’s battery.

What are your thoughts, how has this article helped you?